Springboks vs Wales: Another kick-fest coming?

It's down to the final four at Rugby World Cup 2019. England take on the might of the All Blacks while South Africa face a potentially tough encounter against Wales.

In this episode of SportsTalk Special, Buhle Madulini and John Robbie are joined by Robbie Kempson as the trio discuss both semifinals, Jaco Peyper’s "elbow gate" and how this might just be the Springbok’s year.

One has to feel for Jaco Peyper, is an outstanding referee, who was denied a semifinal game because he took a picture with some fans.

"It is nonsense. It is political correctness gone mad, but I suppose it's just one of those things," says Robbie.

But should we really be concerned about the refereeing?

Listen to the full podcast below: 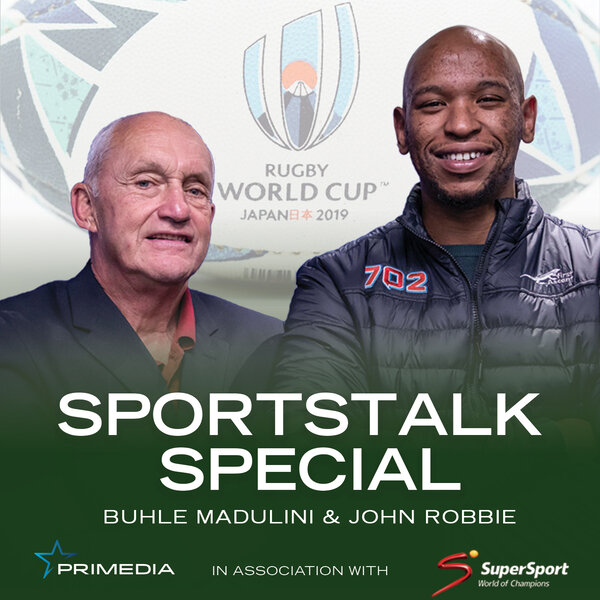 Springboks vs Wales: Another kick-fest coming?

Its down to the final four at Rugby World Cup 2019. England take on the might of the All Blacks while South Africa face a potentially tough encounter against Wales. Buhle Madulini and John Robbie are joined by Robbie Kempson as the trio discuss both semifinals, Jaco Peyper’s ‘elbow gate’ and how this might just be the Springbok’s year.

"I think we should be concerned. We haven't won with the ref that's going to be refereeing our game. His record with us is cause for concern, but there's not much you can do about it. But I agree with John, I think it's absolute rubbish that he's been sanctioned for what is just a mild-mannered sense of humour," says Kempson.

But onto the matches at hand, and the semifinals this weekend.

Strangely, the issue of spying has come up, much to the amusement of our analysts. England have seemingly accused the All Blacks of spying on their practice sessions.

"Oh, give me a break. What are you going to pick up in a training session that you're not going to watch with a billion other people during a match," asks Robbie. "It is crazy, it is nonsense, it is daft."

England are clearly nervous about the All Blacks, even though the reigning champions are going for a hat trick of World Cup titles.

"With this All Black team particularly, the way they played against Ireland, I would be nervous if I was England," says Kempson.

England haven't really been tested in this World Cup. Their game against France was called off, and Argentina were poor against them.

Wales versus South Africa is a tough game to call.

"Wales haven’t brought the form they had at the 6 Nations... and they’ve really under-performed at the Word Cup and Warren Gatland will know that. That probably gives South Africa the edge. I don’t think our game plan is going to change that much. I do think that Willie [le Roux] should move on and maybe bring Cheslin [Kolbe] in at fullback, bring Sbu Nkosi onto the wing. Would Rassie [Erasmus] take that risk in a semifinal? Probably not," says Kempson.

"How they [Wales] are in the semifinal is almost amazing because they’ve played so badly by their own high standards. Fiji gave them a good go, Australia and France broke through their defence a number of times," says Robbie.

The Springbok defence has been impressive in the tournament, and it poses a problem for Gatland.

"Our defence will be resolute again. We'll have more line speed. It's going to be a very different game to the England game, I think it's going to be brutal because Wales have a similar attacking game to what we have, but they have wingers who can counterattack," says Kempson.

“It's almost like 2007 and 1995, where you just get the feeling that maybe this is going to be our year. You think about it, an All Black and South Africa final again is what everyone would want," says Robbie.